Artistry in the Time of Social Distancing

As Austin Opera follows shelter in place orders, Inside Indy Terrace is not coming from our physical rehearsal hall but from the spirit it embodies. As everyone settles into home offices and gets accustomed to new ways to communicate and collaborate, Austin Opera is working hard to continue to bring opera to Austin.

Despite the inherent challenges of these unprecedented times, the opportunity for ingenuity is abundant. It’s a great pleasure to bring you our new Live from Indy Terrace series, broadcast each Friday at 3:00 p.m. and we hope you’ve enjoyed watching the episodes as much as we have enjoyed creating them. It allows us to continue our mission and connection to you through the medium of opera.

We are not alone. OPERA America recently compiled a useful resource of digital offerings and we’d like to share it with you. This list is not exhaustive, but a terrific launching point for exploring the streamed operatic (and classical) landscape. See OPERA America’s Schedule of Virtual Opera Performances Here.

As the need for physical distancing continues, we hope you find respite and community in the digital world. We send thoughts of gratitude for you, our Opera Family, and for the beauty of the art form we cherish and love. Take care, and we’ll “see” you this Friday at 3:00 p.m. for the next episode of Live from Indy Terrace.

Reason No. 1: An innovative video experience explored on demand. Thanks to Austin Opera partner Subvrsive, Winter Journey can be streamed from the comfort of your home with an immersive format meant for exploring from all angles. We can’t wait to share more on the project, but for now, know it’s worth waiting for.

Reason No. 2: David Adam Moore. This Texas native wowed as the lead in The Manchurian Candidate, gave a beautifully connective performance in Silent Night, and bared his heart (quite literally) in Soldier Songs, so David is no stranger to Austin audiences. His stunning baritone voice will be on full display in Winter Journey, as will his photography and film work. We get a complete picture of the man as an artist and a creator, and it’s not one to be missed!

Reason No. 3: The music of Schubert. Winter Journey (Winterreise in German) is a song cycle (meaning a purposeful grouping of songs meant to be performed as one work), and the last Schubert wrote as his health began to deteriorate due to illness. He only lived to the age of 31 but composed over 600 songs for the voice. Scholars consider him a masterful creator and singers adore performing his work. We think you’ll see why he is one of the most revered composers in the vocal canon!

Reason No. 4: The original projection elements. Experience Winter Journey as a true art piece, as created by David Adam Moore and his partner, Vita Tzykun. Under the banner of their production company GLMMR, David and Vita compiled hours and hours of video footage often shot in wintery locales (and often with David as the subject), and carefully tuned and mapped the elements to form what can only be described as immersive visual art. Deepen your connection with the music and text as the images are projected on the stage and onto David himself. 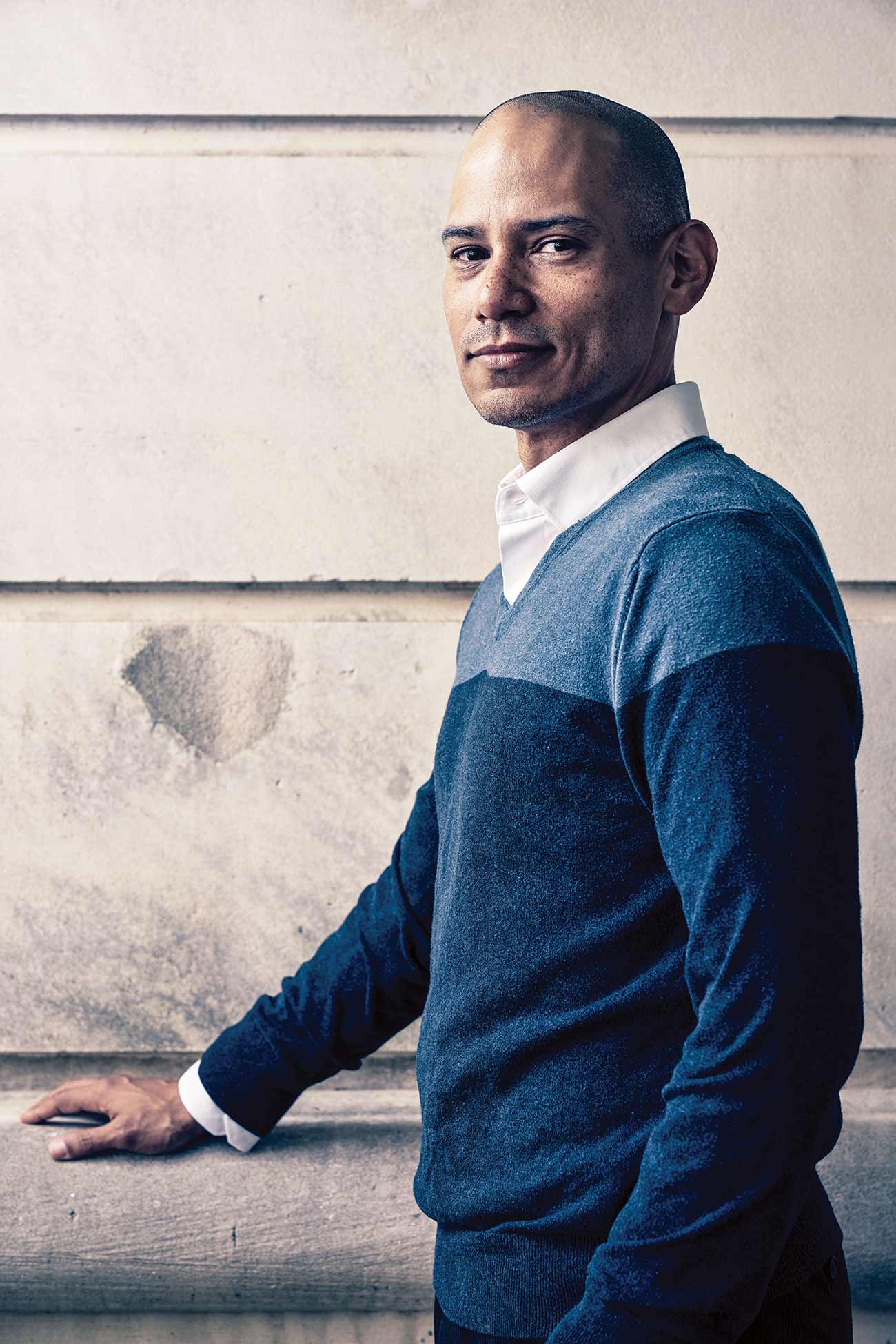 Professor of Musicology at The University of Texas at Austin
photo by: Matt Wright-Steel

I had the pleasure of sharing a cold brew coffee with Dr. Charles Carson, Professor of Musicology at The University of Texas at Austin, on a warm September afternoon in 2019. We meandered through recollections of music school, of how “perfect” the first act of Turandot is, of our mutual respect for Maria Callas, and of how organic experiencing music can be.

Dr. Carson’s enthusiasm for opera was apparent from the start. Right away, he offered up his “How-I-Found-Opera” story and it struck me, not because it was unexpected, but because of the impact it had on his life.

“People ask, ‘does opera outreach work?’ It works,” he said. He recalls sitting in a third-grade classroom when in walked a pianist, a soprano, and a tenor who commenced an engaging opera presentation. He said the musicians offered explanations of what they were performing and gave reasons for the structure of the music. “And the next day,” Dr. Carson said, “We got on a bus and went to Houston Grand Opera to see The Magic Flute. I remember sitting there, a third-grader, thinking, Wow – I get it – this makes sense to me. I remember trying to explain it to my Mom, ‘It’s like they’re saying something with words, but they’re also whispering in my ears with music.’ I decided I wanted to see more opera.”

Dr. Carson began begging his family – and later, high school classmates – to accompany him to the opera. He knows well the assumptions the average person makes about opera and sees an opportunity to pay it forward since someone helped him make his opera discovery.

While introducing more and more people to opera, Dr. Carson began to discern what he calls “lynchpin moments.” These moments, like “rungs on a ladder,” he says, also make it into his Austin Opera pre-opera talks. “They give audience members something to latch on to,” Carson said. “It enhances their experience. I have them listen for a specific motif, or for how the piece gears up for a big moment, how you can sit in that moment, and then how the composer moves away from that moment.” He adds, “to me, that’s the mark of a really great piece when those moments are so well integrated that they kind of sneak up on you, even if you know they’re coming.”

He was quick to point out that he doesn’t consider himself a serious opera scholar, but rather, likens his adoration of opera to his brother’s love of baseball, “Whenever my brother travels he seeks out the baseball stadium and goes to a game or takes a tour. I do the same thing with opera and opera houses.”

It’s obvious that Dr. Carson’s initial introduction to opera in a third-grade classroom has never left him. We invite you to experience one of Dr. Carson’s informative, accessible, and entertaining pre-opera lectures – Opera Overtures – throughout the 2019-2020 Season.

Dive Back Into the Magic of Austin Opera's "Everest!"

Austin Opera is proud to introduce Samantha Miller as this year’s recipient of the Austin Opera Educator of the Year Award. This award was created in 2019 to recognize outstanding educators who creatively motivate and inspire students and colleagues through the arts disciplines.

Samantha Miller currently serves as the Choir Director at Manor New Tech Middle School. She is a graduate of The University of Texas at Austin, with a B.M. in Choral Music Studies. Ms. Miller is in her seventh year of directing choirs in Manor ISD, starting her tenure at Manor Middle School before moving to create the choir program at Manor New Tech Middle School in 2017. Under her direction, in three years the New Tech Gladiator Choirs have become the most successful competition choirs in the history of Manor ISD, receiving consistent Superior ratings at University Interscholastic League competitions (UIL), Music Across Texas, and the Texas Renaissance Festival. All three years, top-ranked singers have also successfully qualified for membership in the Texas Music Educators Association (TMEA) Region 26 Choir. Their outstanding musicianship has won them invitations to perform at conventions in Downtown Austin, The University of Texas at Austin School of Social Work, The Texas Capitol, and Carnegie Hall.

Ms. Miller and her students regularly attend Austin Opera final dress rehearsal performances through our Access Opera program. Prior to the live experience, she utilizes the Access Opera multimedia curriculum to present the music and story of each opera to her students.

After teaching the provided curriculum, she then turns the reins over to her students, who use the same resources to present their learning to the faculty members and parents who will chaperone them to the live performances.

The learning continues long after the busses leave the production; Ms. Miller extends the opera curriculum by encouraging her students to utilize their unique interests and skills, such as creative writing and digital art, to respond to their live opera experience. The artwork seen here was created by one of her students in reaction to their Access Opera experience of Everest, produced by Austin Opera in January 2020.

Thanks to Samantha’s masterful teaching and commitment, hundreds of students have been introduced to opera. Her enthusiasm for the art form has impacted Fine Arts instruction across Manor ISD, where students from every campus have now participated in one of Austin Opera’s educational programs.